SEND US YOUR AUDIOGRAM

The information is integrated at the level of brainstem and cerebellum with influence from cerebral cortex including frontal, parietal and occipital lobes. The integrated input information results in various motor and perceptual outputs.

Dizziness/Imbalance can happen because of problem in any of the three Sensory systems (Eye, vestiular and Somatosensory), their central connections (projections) and the motor part of the Balance system. 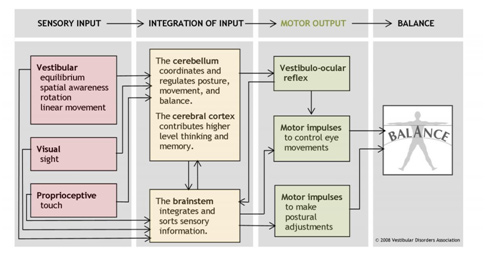 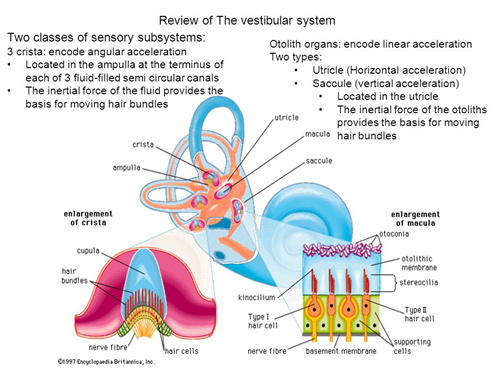 Covering the crista ampullaris is gelatinous membrane the cupula. The Cupula has same specific gravity as the endolymph and is not responsive to static position changes of head in gravitational field.

The Gelatinous covering of Otolith Maculae has calcium carbonate crystals called otoconiaembedded in fibrous network . This makes the specific gravity significantly above the endolymph. Thus the Maculae are responsive to linear acceleration.

There is always a spontaneous tonic firing in the vestibular Nerves. Which is intrinsically generated

Stimulation in any of the three functional pares causes an increase in neural firing on that side and corresponding decrease in activity on the opposite side.This asymmetrical neural input from the vestibular nerves is interpreted by CNS as either angular or linear acceleration. This asymmetry also causes compensatory reflex eye movement in the pane of canals being stimulated.

e.g Stimulation of Lateral canal on RT side makes the person feel a movement to the right side. The patient’s eyes reflexively move to the Lt mediated by VOR. This movement is interrupted by fast compensatory movement (saccades) of the eyes back in the direction of acceleration. The saccade is not part of VOR but is a resetting reflex stimulated by the position of the eye within the orbit.

If there is no acceleration the nystagmus will stop in 20-25 seconds. Person will not feel the constant velocity. However if the person stops immediately the person will feel an intense rotation to Lt and will have a Lt beating nystagmus.

Cupola returns to equilibrium in 8-10 sec. The time for Cupola to return to within 37% of its equilibrium position is referred to as the cupula time constant (normal 6-8 sec).

The time required for the magnitude of slow component of eye velocity of nystagmus to reduce to 37% of its original value at the start of deceleration is called Canal-ocular time constant (normal 15-18 sec).

The vestibular system plays a central role in the maintenance of equilibrium and gaze stability.
The vestibular sensory organs transducer the forces associated with head acceleration and gravity into a biological signal. This signal is utilized by control centers within the central nervous system (CNS) to develop a subjective sensation of head position in relation to the environment, and to produce motor reflexes that facilitate vision and locomotion.

The function of vestibular system is to generate information about head movement and head position in space and to distribute this information to appropriate sites located throughout the CNS that subserve the bodily function.

One aspect of vestibular nucleus is to relay vestibular information throughout the neuro-axis to subserve the various conscious and unconscious behaviours associated with equilibrium.. This is achieved through the following reflexes.

Main function of VOR is to control of eye position during transient head movements to maintain a stable visual image.

In addition to this dynamic control of eye movement other neural pathways independent of head movements contribute to eye movement control.

It may be thought as a ocular gyroscope that generate eye rotation to compensate for head movements, so that the image of outside word can stand still on the retina for as much time as possible.

The VOR maintains gaze during head and body movement. This gaze stability is accomplished by activation of canals (SSC) during angular head movement (aVOR) and by activation of otoliths during linear translation or as head is oriented with regard to gravity (LVOR).

Smooth pursuit, Sccades and optokinetic eye movements assist in maintaining clear visual image and contribute to the perception of speed and direction of body movement

Tests based on VOR: 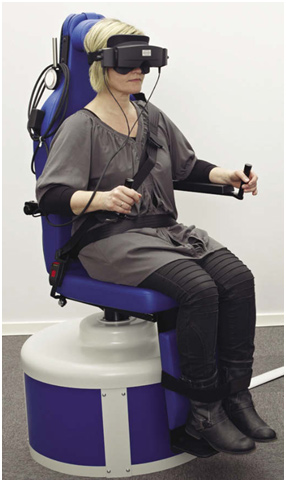 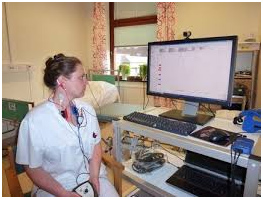 VSR serves to stabilize the head and to control erects stance relative to gravity, organs for VSR are antigravity muscles, the extensors of the neck, trunk and extremities. Acute unilateral lesion will cause a tendency to deviate and to fall towards the affected side as well as exhibit ipsivervise turning in step test.

The Vestibulo-Spinal Reflex is predominately a descending motor response pathway which provides the musculoskeletal system through the reticulospinal tract with information for the antigravity muscles. This provides information about posture and gravitational pull. This comes primarily from the Otolith mechanism. 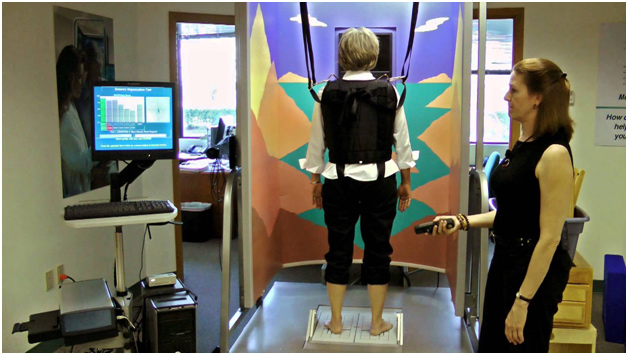 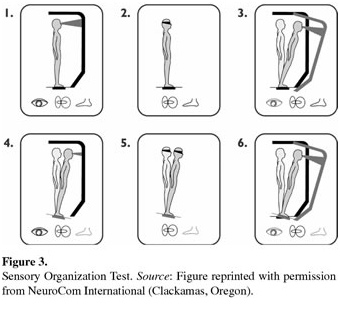